I went up to Stitches West (Santa Clara) this weekend, taking the Jeep and leaving John stranded at the RV. I stayed with my best friend “Jane Eyre,” who is a doll and who lives about 2 miles from the convention center. It was lovely to visit with her, but we didn’t get in each others’ way.

I had classes Friday, Saturday, and Sunday at Stitches, and everyone suggests scaling back on classes for your first Stitches event. I’m glad I went with the Almost The Works package and did so many classes. I never had a moment of downtime, but I was really ok and happy with that. My class time, a large portion spent knitting, was like down time for me.

Thursday was Opening Day, and I missed all the events and luncheon at the outset because I hadn’t come up from Santa Cruz yet. That was OK, though. I arrived in time for the marketplace preview– on Thursday night, they open the Market for students to do their shopping, in case they’re going to be in classes so much that they can’t get in during the rest of the week. I bought a couple of things for spinning on Thursday and scouted for other goodies. I also dropped off a hundred copies of my comic book at the Yarn Place’s booth, and set up a time for a signing on Friday. Thursday night was the Student Mixer, which was kind of lame, but I sat and knitted and talked with another attendee and had a lovely time.

On Friday, I was in Pattern Writing 101, which was a more thorough exploration of how to write a pattern. It was good, interesting, and showed me that I have a lot I can learn about not putting too much into a non-beginner pattern. But it was good and useful and I enjoyed the class.

At 5, I went down to the market and signed comic books for a little over an hour. My friend Jane came and shopped at the market, and then the two of us attended the Fashion Show. This is a show of professionally-designed knitwear. There were some lovely designs. There were some “haute couture” designs (impractical, but developing innovative techniques). After the show, Jane went home and I stayed for the post-show banquet which was kind of meh and ran too late (all of these things ran too late all weekend.) Saturday’s class was “Design Your Own Socks” with JC Briar. I kind of knew this would be a bit remedial for me, since I’ve knit a wide variety of socks to fit many feet, but I learned some new techniques and I enjoyed myself. I also knitted the first in a pair of baby socks. As I said to one of the other students: any day spent knitting a sock is a good day!

At noon, I did another signing which was only supposed to be an hour, but ended up tying me up for 90 minutes (all-day classes like the ones I was in have a 2-hour lunch break, which is enough time to actually go to the market and get lunch).

Saturday evening was the student banquet and fashion show. Dinner with other students, followed by the winners of the Think Outside the Sox sock design contest (from last year), plus a student-driven fashion show. These were projects that “ordinary” knitters and crocheters had made, and wow were they amazing. There was a lace tablecloth from a woman in North Dakota that took her 3 years to knit. There was lace everywhere– from a knitter’s first lace shawl to a 3-years-in-the-knitting lace tablecloth, to a pi shawl that the knitter had cut afterthought sleeves into, turning it into a gorgeous laceweight jacket with lapels. There were many other amazing creations as well. Some were designed by the students themselves. Some were adapted from published patterns. Some were kits bought in previous years– it was, in essence, a real smorgasbord of beauty. Next time I go to a Stitches event, I will skip the official fashion show and just go to the student show!

I also knitted the second in the baby sock pair, because the last step of any sock pattern is ALWAYS “cast on for the second sock.” ALWAYS!

Saturday evening after the events, I had an interesting “moment” when Jane’s son (my age) came to the house unexpectedly to use the shower after a charity crab fest he was helping with. Having a big guy trying to get into the house I was in (alone– Jane was at work) was startling. It should have been frightening, but I’ve met him once before, and THANK GOODNESS, he was wearing a name tag so I knew who he was! Sunday was the Creating New Sock Architectures class with Cat Bordhi, who is a sock-knitting queen. Another great class, which really opened my eyes to some of the things one can do with making socks. During the 6-hour class, I knitted a little sock using a new technique, and had a lovely time. The woman sitting next to me in class was pregnant with a girl, so I spontaneously gave her the baby socks I knit the previous day. During class, she knit a pair of socks in gray yarn, which will also be for her baby, so that baby will have nice warm toes! She said she had knit another sock in the same yarn the previous day, so her baby will have a trio of socks, with one being fraternal. I myself am a big fan of fraternal sock pairs and I’ve long believed that handknit socks could come in trios. I usually have enough yarn for 3 socks when I’m knitting at least for my own feet, and isn’t it nice to be able to rotate your socks around a little?

I did my final shopping at lunchtime, which resulted in an impulse purchase of waaaay too much sock yarn. I don’t think I should be held responsible when one of the vendors puts Tofutsies on sale for 3 for the price of 2. Really! What am I supposed to do?!? 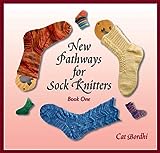 I also bought Cat’s book New Pathways for Sock Knitters, and asked her to sign it, which she graciously did for me.

And then I headed home. It was raining. I passed the bomb squad about a half mile from the convention center. Don’t know what they were doing, but I hope none of our knitters were involved. I passed an overturned car (other direction) on my way over Highway 17. I passed a car that had spun out and hit the embankment on my side of 17. I came off the highway at the first exit and even though I had been going fairly slow all along (about 40 mph, never out of 3rd), something happened, and the car lost traction. I spun completely around, and went off the side of the offramp, the rear wheels digging into the mud. A couple of people stopped immediately to help. I was not hurt, but I called John for instructions on making sure the car wouldn’t slide further (I was tilted back more than 45 degrees, so there was some risk of rolling all the way over. Which would have sucked. Probably the only reason I stayed upright is because John’s heavy toolbox is strapped very securely down to the Jeep floor.

I got out of the car eventually and John worked on finding a ride over, preferably with someone who could help winch me out. I waved helpful passersby along. The CHP stopped by, and I told him first off that I wasn’t hurt, and that my husband was coming to pull me out. He checked the scene, called the other CHP who covers this area, and then we just kind of hung out and waited for John. When John arrived (driven by my brother in law– no winching ability in the minivan), they got a tow truck to yank me out of the ditch. The whole thing was done in about an hour, really. I didn’t get a ticket (no harm, no foul, I guess), and it cost us $100 for the tow. Just like Saturday night, I wasn’t afraid– I wonder if I’ve somehow broken my adrenaline, or if (more likely), I wasn’t afraid because i wasn’t actually in any danger.

So, my weekend was… very full. And very exciting, in all possible ways. I didn’t take enough photos. I didn’t write down nearly enough notes in class, though I was listening while I knitted (but not being a kinetic learner or having ADHD, I don’t listen as well when I’m knitting as I do when I’m writing notes). I learned a great deal, particularly about designing socks, but also about design in general and pattern writing. I’m going to look into some support roles I could freelance in as a pattern writer and editor, which would leverage my tech writing background while giving me some excellent training in pattern writing.