My Thursday night game this week was threatening to cancel due to two players not being available. 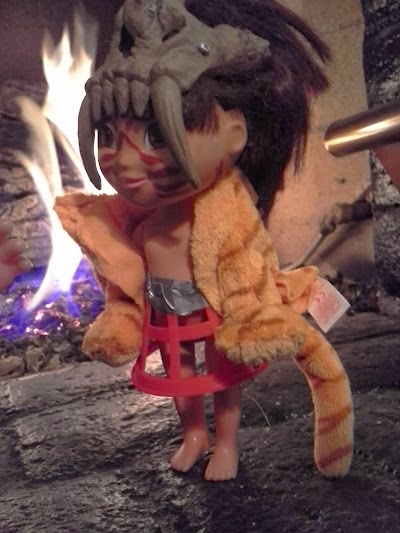 I sent Brian, the only other player available, a message asking what he wanted to do. Cancel, play Doll (which is playable with 2 players) and then maybe some board games, go down to one of the open board gaming groups that meet on Thursdays at game/comic book shops, or “make dolls for Threadbare.”

For those who don’t know, Threadbare is a role-playing game I’m writing and have been writing for about 2 years now. Here’s a short description:

Threadbare is a stitchpunk role playing game set in a broken world populated by broken toys. Your character starts out as a Softie (soft-filled toy), a Mekka (hard-shelled, plastic or metal toy), or a Sock (a single sock, often thought to have been lost in the laundry).

Combining gaming and crafting is pretty much the definition of “win-win” for both Brian and myself, so that was what stuck. As a bonus, Brian is going to run a playtest of Threadbare for our Thursday group in a couple of weeks. I’m excited to see someone else run my system– not only because I will get to play, but also because I need to see how someone runs it who hasn’t played it with me as a GM before.

We met at the local thrift store and wandered around a bit before we had successfully scrounged a couple of dolls and plastic toys. Brian went for things with electronics, because he knows he can cannibalize the electronics parts for later. We then met up with a friend and Brian’s wife for delicious tacos. Because we love tacos, and we rarely get to enjoy them on game night.

Note to taco places: You should totally deliver.

Anyway, Brian ended up with a baby doll (he has kind of a thing for baby dolls), a Wall-e toy robot, and a purple octopus toy with tentacles (I have a thing for tentacles). I came home with this: 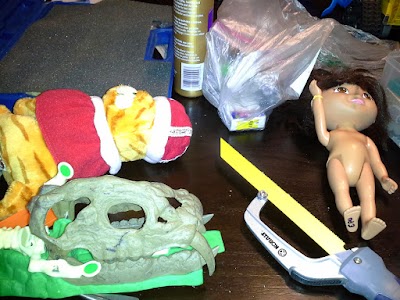 The saw isn’t from the thrift store– Brian had that in the car.

I have here a Dora the Explorer doll (naked), a Garfield beanie baby, and some kind of weird plastic catapult toy that includes a dinosaur skull.

That dino skull was my first find at the shop. When I picked it up, we both looked at each other and said YES.

I should mention at this point that Brian has a twitter feed in which he has posted a “do you want to know more” thread in the past that garnered many comments. We kind of live-tweeted our experience, although it really ended up more on Facebook.

I have to admit to a little bit of envy over Brian’s tentacles, but I am also pretty sure he wishes he’d seen the dinosaur skull first. At least, that’s what I tell myself.

After tacos, we went back to my place to make babies… baby dolls, that is! Get your minds out of the gutter! Brian dismantled pieces and put them back together. I used a dremel to cut apart the skull and a drill to attach it to Dora’s head. I have an old Mouse Trap game, so I used a part from that and some duct tape for her “skirt.”

Garfield was a dream to unstuff and turn into Dora’s coat. I kind of wanted it to still be obviously Garfield, but I needed to cut the face off to make the jacket fit. So I left the TY tag on. And the tail.

I took Dora’s head off, but it turns out I didn’t need to. The screws (scavenged off of one of the toys Brian dismantled) were a perfect fit with the drill bit I used. 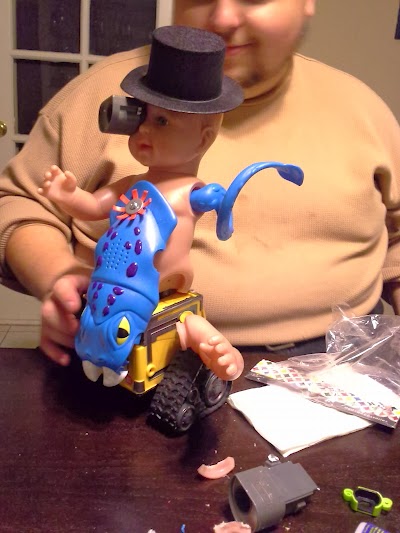 Meanwhile, Brian struggled with my 2-stage epoxy, which made something of a mess. Otherwise, he had a blast cutting and screwing baby pieces and tentacles together. We determined that his Wall-e robot was the “base” character who had cannibalized two other toys– the baby doll as an upgrade to Wall-e’s charisma, and the tentacles as a kind of repair for lost/moved arms. The baby doll also has half of a Wall-e eye piece. Removal of the baby doll eye was creepy on a level that neither of us can really describe comfortably.

I have a number of tiny top hats for steampunking, so Brian’s robot mayor now has one… screwed directly to his head.